Day 84 – Thankful for a Great Night with Rick

Today I’m thankful for a great night with Rick.

Rick and I have been friends for over 35 years…  Kinda makes me feel old when I think of it that way!

Yesterday afternoon I headed up to St Paul to meet up with Rick for an afternoon / evening of doing a pub crawl.  The proposed pub crawl consisted of stopping at several breweries that were just off the light rail.  We had a handful of places to go and then were going to end the night going to our old favorites at the U of M before heading back to his place.

After a beer at his house we were off.  The first brewery was Burns Brothers, this awesome little brewery tucked about half a mile off the light rail.  We got there, found a table, and grabbed a couple of brews and started shooting the bull.  After a little while my Shiny Syndrome got the best of me and I noticed a bunch of games on the shelf and amongst them was Catan.  Ten minutes later Rick and I were playing our first game and having a blast!  Nothing like a great game with a great friend and a great beer.

After a couple of beers and our game we decided to keep going on the plan and go to the next brewery.  After a nice walk, light rail ride, and a three quarter of a mile walk we were chilling with a beer and some appetizers.  It was nice, but we just weren’t quite feeling it.  That’s when Rick had the best idea of the night…  Screw the plan, go back to the one that was awesome and bust out some more games of Catan! 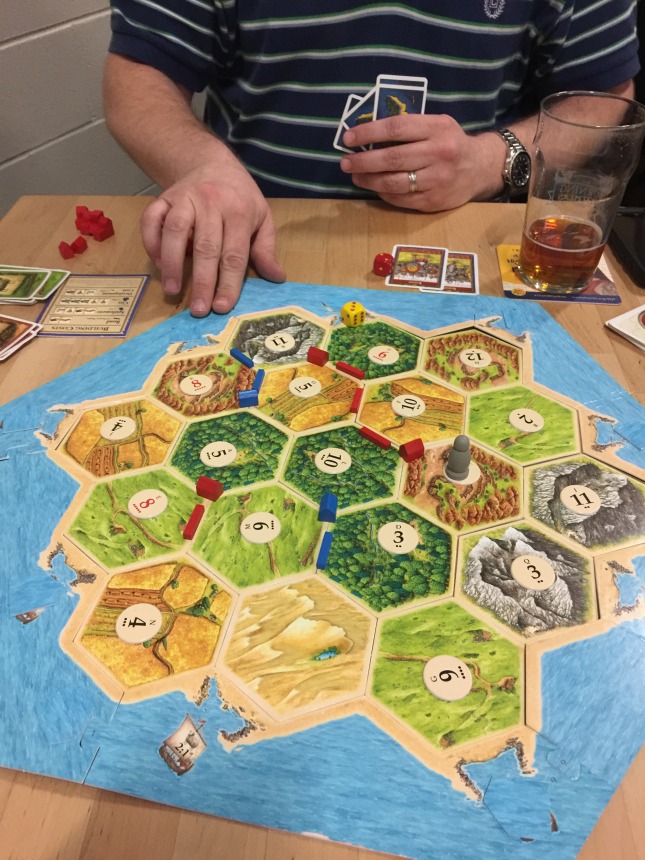 It was AWESOME!!!  More time shooting the shit while having a couple of beers while beating up on each other.  We spent the next coupe of hours doing just that.

After that we headed back towards his place, grabbed a bite to eat at our old standby, O’Gara’s.  After some insanely greasy food (Irish Egg Rolls & a Hangover Buger) and a great story that has to be told in person to be believed (involves two very drunk wives of a plumbers at their husbands’  Christmas party asking Rick for his autograph), we headed back on a nice walk back to his house.  On the walk we re-counted some of the highlights of the night and called it a day.

Today I am thankful for a great night with Rick.  It was awesome to spend that much time with someone I’ve known for 0ver 3 decades.  We talked about everything from when we were kids to talking about our kids.  We talked business and what was going on in our careers.  Most importantly, we had fun joking around and talking about absolutely nothing important.  It was a great reflection of our friendship over the years and was a damn near perfect night with my old friend…  Who repeatedly reminded me that in 9 months I’d be in my forties and he’d only be in his thirties…  That’s what friends are for!

Posted by Thankful4Forty on December 20, 2015 in Uncategorized